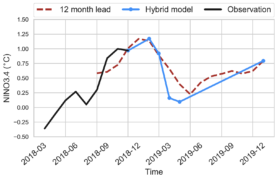 (Black line is the observed NINO3.4 index until October 2018. The blue line is given by predictions from hybrid models found to be most optimal at the different lead times. The dashed red line is the running 12-month lead time prediction.) 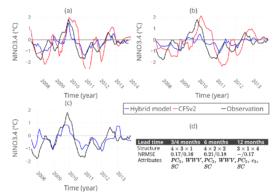 So far, statistical and dynamical prediction models are able to predict El Niño with reasonable skill up to six months ahead. Because an event always occurs in the northern-hemispheric winter, this six-month barrier is also called the spring-predictability barrier. The new method developed at the Centre for Complex Systems Studies (CCSS) aims to improve the skill  of El Niño predictions on lead times from 6 months to 1 year, breaking the  spring-predictability barrier. The method makes use of a machine learning approach (an artificial neural network). The ‘machine’ in this method recognizes patterns in the Pacific climate system at an early stage, which could eventually lead to an El Niño or La Niña event. Network theory is used here to feed the relevant information into the ‘machine.’

Why does it work?

El Niño is difficult to predict beyond six months because of its chaotic nature and the noisy tropical atmosphere. However, a lot is known about the dynamics and the physical processes which are provide a long-term memory  to El Niño. In the prediction method of the CCSS, the knowledge about these processes is used to select and reduce the input (or attributes) of the machine. This allows the problem to be smaller, computationally less intensive and to require less data (in terms of the length of the time series to train the machine). 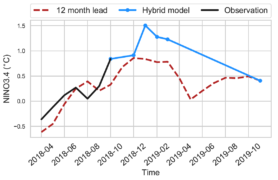